HOME > News > Daptomycin: a lipopeptide antibiotic for the treatment of serious Gram-positive infections

Daptomycin: a lipopeptide antibiotic for the treatment of serious Gram-positive infections

Daptomycin: a lipopeptide antibiotic for the treatment of serious Gram-positive infections

Infections caused by drug-resistant pathogens are on the rise. Daptomycin, a cyclic lipopeptide with activity against most Gram-positive pathogens, including vancomycin-resistant enterococci and methi- cillin-resistant Staphylococcus aureus, is a newly US-FDA approved antimicrobial for complicated skin and skin structure infections (cSSSI). Daptomycin has a unique mechanism of action that results in destruction of the membrane potential. The rapid bactericidal activity of daptomycin makes it an attrac- tive antibiotic for serious Gram-positive infections.

The increase in infections caused by Gram-positive pathogens and the rise in antibiotic-resistant bacterial strains have prompted the need for novel antibiotics.1,2 Recent reports indicate  that  more than 25% of Staphylococcus aureus infections in Europe  are caused by methicillin-resistant S. aureus (MRSA), and the majority of these isolates are resistant to additional antibiotics.3 The incidence of MRSA varies greatly by country. Over 50% of

S. aureus isolates in Portugal and Italy are methicillin-resistant, isolates in England, Greece, and France have MRSA  rates  around 25%, whereas the Netherlands and Switzerland have the lowest incidence of MRSA.3 Vancomycin has been an effective antibiotic against MRSA; however, the increased use of vanco- mycin has led to the development of isolates with reduced susceptibility. The mechanism of reduced susceptibility to vancomycin in S. aureus has not been fully elucidated and appears to be heterogeneous. Reduced susceptibility to vancomy- cin is correlated with alterations in the bacterial cell wall leading to significantly thicker and more disorganized cell walls.4 These thicker cell walls may sequester the vancomycin from reaching the target nascent cell wall precursors.4Additional in vitro studies have linked development of vancomycin reduced susceptibility with phenotypic changes such as loss of haemolysis and the  mecA gene, and genotypic changes such as the presence of either the group I or group II polymorphism in the agr gene locus.5–7

To date, three vancomycin-resistant S. aureus strains (VRSA) have been isolated in the United States.8–11 Both the Pennsylva- nia and the New York strains were isolated from patients not on vancomycin therapy.9,12 Therefore, the need for new potent anti- microbial agents with MRSA activity is essential.

Daptomycin, a fermentation product produced by Streptomyces roseosporus, is a cyclic lipopeptide antibiotic with potent bacteri- cidal activity against most Gram-positive organisms including multiple antibiotic-resistant and -susceptible strains.13–21 Dapto- mycin was recently approved in the United States for the treat- ment of complicated skin and skin structure infections (cSSSI) associated with S. aureus (methicillin-susceptible, MSSA, and methicillin-resistant, MRSA), Streptococcus pyogenes, Strepto- coccus agalactiae, Streptococcus dysgalactiae subsp. equisimilis and Enterococcus faecalis (vancomycin-susceptible only). Below, we discuss the in vitro potency of daptomycin against a range of other organisms including vancomycin-resistant E. faecalis and Enterococcus faecium.

The unique structure of daptomycin consists of a 13-member amino acid cyclic lipopeptide with  a  decanoyl  side-chain (Figure 1). This distinctive structure confers a novel mechanism of action.22 The proposed mechanism involves insertion of the lipophilic daptomycin tail into the bacterial cell membrane, caus- ing rapid membrane depolarization and a potassium ion efflux. This is followed by arrest of DNA, RNA and protein synthesis resulting in bacterial cell death (Figure 2).22–24 The bactericidal effect of daptomycin is rapid with greater than 99.9% of both MRSA and MSSA bacteria dead in less than 1 h.25,26 This rapid cell death does not result in rapid bacterial cell lysis.24 Daptomy- cin also remains bactericidal (99.9% kill within 24 h) against stationary phase cultures of both MSSA and MRSA present at high density (109 cfu) in a simulated endocardial vegetation model.27

In vitro potency has been demonstrated for daptomycin against a range of aerobic and anaerobic Gram-positive bacteria including multidrug-resistant strains.13–21,28 MIC90 values along with MIC ranges for select pathogens can be found in Table 1. The table shows data from two recent studies illustrating the conserved MIC ranges and values for both European strains and isolates collected worldwide. Daptomycin’s spectrum of activity encom- passes the difficult to treat antibiotic-resistant organisms includ- ing methicillin-resistant and -susceptible Staphylococcus aureus (MRSA, MSSA), glycopeptide-intermediate S. aureus (GISA), methicillin-resistant coagulase-negative Staphylococcus spp. (CoNS), and vancomycin-resistant enterococci (VRE).13–21 Dap- tomycin demonstrated potency against the recently isolated vancomycin-resistant S. aureus as well as linezolid and quinu- pristin/dalfopristin-resistant S. aureus and E. faecium.14,17–20,24 Furthermore, daptomycin is also effective against a variety of streptococcal groups such as the b-haemolytic streptococci including S. pyogenes (Group A) and S. agalactiae (Group B) as well as other Streptococcus spp.13–15,20,21 Along with the com- monly isolated Gram-positive organisms, daptomycin is also potent against Corynebacterium jeikeium, and a variety of anaerobic species including Peptostreptococcus spp., Clostri- dium perfringens, Clostridium difficile, and Propionibacterium acnes (Table 1).28 Drug synergy with daptomycin has been described in vitro with aminoglycosides and rifampicin anti- biotics.29

Daptomycin’s efficacy is enhanced by the near absence of anti- biotic resistance as verified by both in vitro and  clinical  studies.30 Resistance to daptomycin has been difficult to generate in the laboratory both in single passage and serial passage experi ments.30 The emergence of resistance was <0.2% across the  entire set of Phase II and III clinical trials with over 1000 dapto- mycin-treated patients. The reason for this decrease in suscep- tibility is unknown and no transferable elements conferring daptomycin resistance have been isolated.

Analysis of daptomycin pharmacodynamics determined that a once-daily dosing regimen increases the efficacy and safety of daptomycin.31 In vitro and in vivo analysis established that dap- tomycin is effective in a concentration-dependent manner, has a long half-life (8 h), and demonstrates a prolonged post-antibiotic effect up to 6.8 h (Table 2).32 These findings resulted in a once a day dosing regimen recommendation of 4 mg/kg for complicated skin and skin structure infections (cSSSI) in the United States.

Once-daily dosing of daptomycin results in linear pharmaco- kinetics with minimal drug accumulation.31 Daptomycin distri- butes primarily in the plasma, with penetration to vascular  tissues (Table 3). Daptomycin does not cross the blood– brain barrier and does not penetrate the cerebrospinal fluid of normal individuals. However, there was a 5% penetration (relative to serum) of daptomycin into the cerebrospinal fluid of rabbits with Streptococcus pneumoniae meningitis, resulting in clearance of the infection in this model.33 Daptomycin is primarily renally excreted, with the majority of the drug remaining intact in the urine.31 Since  daptomycin  is  excreted  through  the  kidneys,  the dosing interval is increased to every 48 h in patients with severe renal impairment defined as a creatinine clearance of

<30 mL/min. Because of daptomycin’s unique mechanism of action and because it is not metabolized by cytochrome p450 or other hepatic enzymes, no antagonistic drug interactions have been observed. 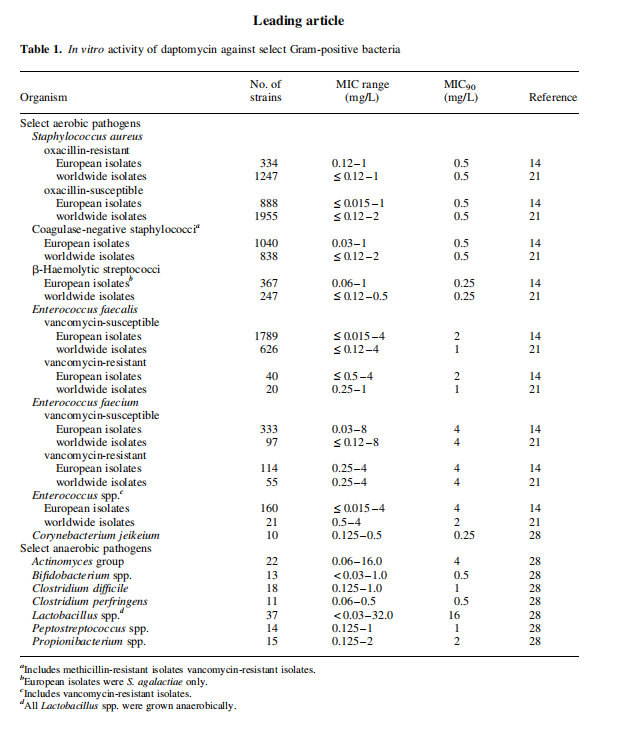 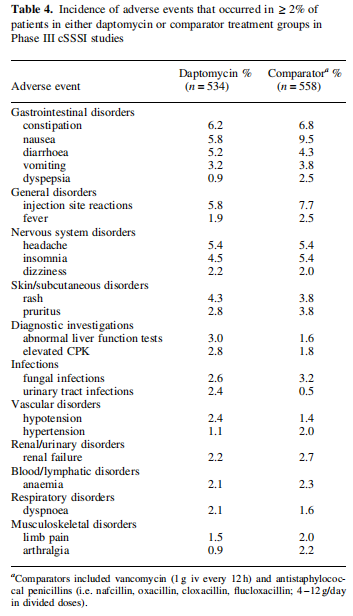 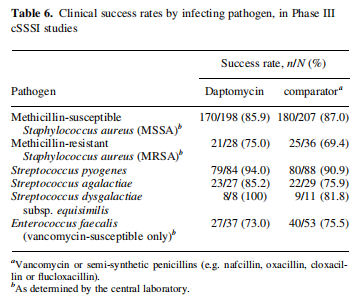 In pre-clinical studies, daptomycin treatment has been linked to fully reversible skeletal muscle toxicity with no effect on smooth or cardiac muscle. Animal studies determined that both degen- erative and regenerative changes are observed in skeletal muscle with no rhabdomyolysis.31 These effects, which can be associ- ated with elevated creatine phosphokinase (CPK) levels,  are  fully reversible after cessation of daptomycin use and were not statistically significant when compared with comparator.31 The

numbers of side effects for patients receiving daptomycin were

comparable to standard therapy and less than 2% of patients receiving daptomycin discontinued therapy.34 The most common adverse events from the Phase III cSSSI clinical trials for dapto- mycin and comparator drugs are listed in Table 4.

The efficacy of daptomycin against a range of infections has been demonstrated in animal studies. Using a variety of anti- biotic-resistant and -sensitive Gram-positive bacteria, daptomy- cin eradicated infections in the blood, muscle, kidney, heart and bone tissues of animals.35–41 These results show promise for daptomycin therapy for further clinical indications. An ongoing Phase III clinical trial is in progress to determine the efficacy of   6 mg/kg daptomycin once a day for endocarditis and bacteraemia caused by S. aureus.

The study was designed to determine whether daptomycin was comparable to standard therapy and was not powered to show superiority. Therefore, statistical  analysis  determined  that  in  the clinical trails, daptomycin was non-inferior to comparator therapy leading to daptomycin approval by the FDA in the  United States.34 Results of the microbiologically evaluable population are detailed by pathogen in Table 6.34 Over 1000 patients were evaluated, and the following pathogens were the predominant organisms isolated; MSSA, MRSA, S. pyogenes,

S. agalactiae, S. dysgalactiae subsp. equisimilis, and E. faecalis. The results from these Phase III trials confirmed the efficacy and safety of daptomycin.

In summary, daptomycin is a rapidly bactericidal antibiotic that  is active against clinically relevant Gram-positive bacteria including antibiotic-resistant strains. Clinical data demonstrate that daptomycin is highly effective against cSSSI and ongoing clinical trials including infectious endocarditis caused by S. aur- eus, should expand treatment indications. The low occurrence of side effects, low resistance rates, and high potency demonstrate that daptomycin has significant clinical utility in the treatment of Gram-positive infections, including those caused by MRSA.