Downloaded from cpj.sagepub.com at University of Sydney on May 4, 2015

Diarrhea, a very important problem in pediatrics, has been with us since antiquity.

Hippocrates defined this condition succinctly    as “abnormal frequency and liquidity of fecal discharges”. Even today, in many parts of the world a large percentage of all deaths in children under the age of ten years is due to diarrhea.

Any factor that impairs absorption of fluids from the intestinal tract or increases intestinal motility may give rise to diarrheal stools. In infants and young children, hazardous degrees of dehydration and electrolyte imbalance may quickly follow. Thus, early control of diarrhea in pediatric patients becomes an important objective of clinical management. A nonspecific antidiarrheal agent, capable of effecting prompt control of symptoms without inducing pharmacologic side effects, obviously would be valuable in therapy.

Pimparker et al. have pointed out that "the seemingly paradoxic use of hydrophiliccolloids in the treatment of diarrhea as well as constipation rests on the modifying effect which these substances may have on abnormal fecal consistency". The efhcacy of a hydrophilic agent in diarrhea depends on its capacity to bind free fecal water and produce a formed gel within a bowel which is not adequately absorbing water because of decreased transit time or because of mucosa which is pathologically affected.

The clinical study here reported was under-taken to evaluate the oral use of calcium polycarbophil suspension for nonspecific treat-ment of acute diarrhea in infants and children. Polycarbophil, a loosely crosslinked copolymer of acrylic acid, is characterized by anextraordinary water-binding capacity that hasled to its successful use in adult patients forsymptomatic control of diarrhea as well as for treatment of chronic constipation. Polycarbophil is a pharmacologically inertmaterial. Like other macromolecular materials, it apparently is not absorbed from theintestinal tract. Experimental findings haveindicated that it does not interfere significantly with the activity of digestive enzymes. Continuous daily oral use for as long as two years did not reveal any evidence of gastrointestinal irritation, systemic toxicity or electrolyte imbalance.

The study was carried out in a total of 67 children with acute diarrheas chiefly due to parenteral causes or to primary enteritis or gastroenteritis. The parenteral diarrheas were symptomatic concomitants of acute infectious diseases of the respiratory tract. The children’s ages ranged from six weeks to over 12 years, and averaged approximately three years. Forty-one of these children were private patients, and the remainder were clinicpatients.

For this investigation, diarrhea was considered to be present only if a patient when first seen, was having four or more watery stools a day. Adherence to this arbitrary definition of diarrhea as a requisite for a patient’s admissibility to study served to exclude children with milder acute diarrheal states.

Calcium polycarbophil suspension and, for the purpose of control, a kaolin-pectin suspension of grossly similar appearance were the only antidiarrheal medications used during this evaluation. The two preparations, supplied in identical code-labeled bottles, were dispensed in random sequence. The prescribed dosage of both preparations varied, depending on the children’s age, from a halfteaspoonful three times a day to two teaspoonsful four times a day. All patients were treated with either the test medication or the control medication over a five-day period. Throughout this period the severity of eachpatient’s diarrhea was evaluated daily.

Patients admitted to the study were given a conventional dietary regimen for diarrhea. Solid foods were proscribed. Orally, only clear fluids were allowed for the first 24 hours. Low-residue foods (skimmed milk, gelatin, applesauce, bananas) were introduced during the second 24 hours, with a subsequent gradual resumption of the usual diet.

The antidiarrheal effectiveness of calcium polycarbophil and of kaolin-pectin were com-pared in terms of the length of the interval between the start of treatment and the time when the patient’s stools became substantially or completely normal in consistency andfrequency. The therapeutic response was judged to be “excellent” when diarrhea ceased within 24 hours, “good” when controlled between 24 and 48 hours, ‘‘fair” when diarrhea abated after 48 to 72 hours, and “poor” if diarrhea was still uncontrolled after 72 hours.

Of the 67 cases, 38 were treated with calcium polycarbophil, and 29 with kaolin-pectintherapy. The age distribution is summarizedin Table l. 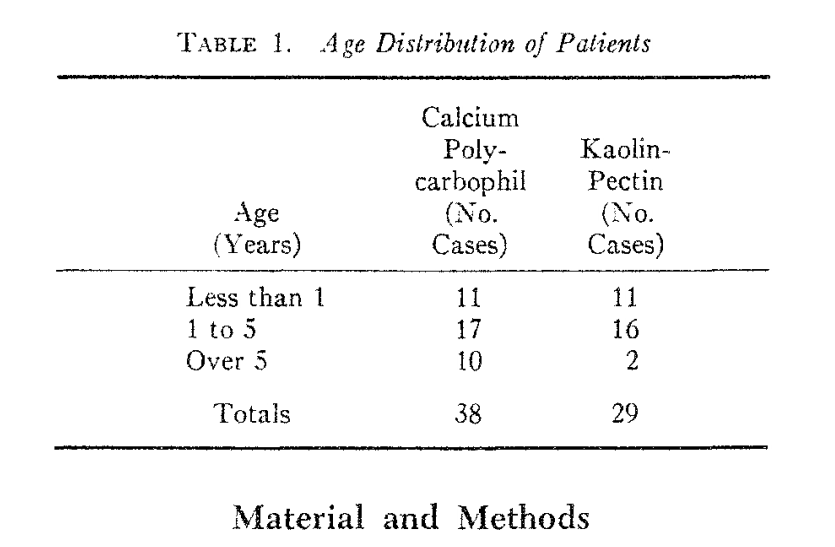 Clinically significant side effects were not observed during treatment with either calcium polycarbophil or kaolin-pectin. Both medications were generally well tolerated. In two of the children whose diarrhea was associated with vomiting, regurgitation occa-sionally followed the administration of calcium polycarbophil.

2. Calcium polycarbophil appears to be effective and safe for the nonspecific treatment of diarrhea in children.