Background of patients. Two patients in the CP group were excluded from the study because their stool consistency was too firm and they experienced difficulty in defecating after

Table 1 Background of each group

taking the drug. Another patient in the CP group and two patients in the control group were excluded from the study per the patients’ request. Eight patients were enrolled in each group; the mean age, sex distribution, and ratio of two- to three-stage operations did not differ between the groups (Table 1). 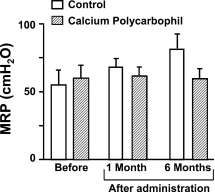 Fig. 1 Change in MRP. No time-dependent increase in MRP was observed in either the CP-treated or the control group. No differences were observed between the groups before or 1 and 3 months after drug administration. 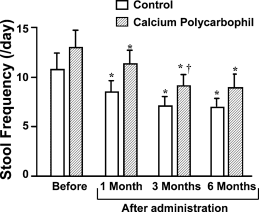 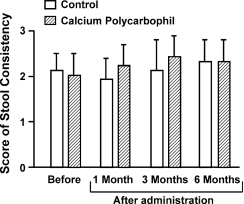 Fig. 3 Change in stool consistency. There was no time-dependent increase or decrease in the score for stool consistency in either group, and no two values were statistically different from each other.

different from one another (Fig. 4). These scores increased in a time-dependent manner, to 4.3  0.4 and 4.6   0.2 in   the control and CP groups, respectively, after 6 months of drug administration. However, the time-dependent increase in score did not reach statistical difference in the control group (Fig. 4). Although the score at 1 month after CP ad- ministration decreased and was significantly lower than that measured in the control group, it increased thereafter in the CP group, i.e., after 6 months of CP, the score (4.6 0.2) was equivalent to that in the control group and higher than that in the CP group before and 1 month after drug administration (P < 0.05; Fig. 4).

The effect of CP on MRP and stool frequency or consis- tency in patients undergoing proctocolectomy with IPAA was not obvious. However, patients receiving CP exhibited diminished nighttime soiling with time in comparison to the control group, suggesting that CP may ameliorate night- time soiling by hardening the stool. Any CP-induced im- provement in stool consistency may not have been sufficient to permit recognition by patients as a change in stool ap- pearance. It is noteworthy that two patients taking CP were excluded from the study due to difficulty in defecating asso- ciated with a too firm stool consistency. The process leading to improved bowel function after procotcolectomy is referred to as “intestinal adaptation.“ IPAA significantly increases the villus length and density and the mucosal surface area/serosal length ratio in the ileum [7]. A concomitant increase in the plasma concentration of peptides released from the ileum (e.g., peptide YY) may contribute to these morphological changes [8]. Stool consistency is related to the ratio of water retention by insoluble solids to total luminal water in the lu- men, with a low ratio being associated with diarrhea [5]. CP is a synthetic, high molecular weight polymer with marked water retention and gel-forming capacities [9]. The former property reduces constipation, whereas the gelling property ameliorates diarrhea. The laxative and antidiarrheic effects of CP have been reported in dogs and rodents [5, 9]. It is likely that the gelling property of CP may promote this adaptation by affecting the water content in stool.

The most popular antidiarrheic agent for chronic diar- rhea and postproctocolectomy diarrhea is loperamide [10,

11]. In patients with restorative proctocolectomy, oral lop- eramide is thought to diminish stool frequency by affecting the small intestine proximal to the pouch, since loperamide suppositories suppressed pouch contraction but did not re- duce stool frequency [1]. Others reported that loperamide reduced bowel frequency by diminishing total stool weight, but not individual stool weights, in patients with IPAA [12]. In a canine model of IPAA, the loperamide-induced decline in stool frequency was attributed to its antisecretory effects, because the drug did not affect motility in the small intestine and pouch [13]. The clinical studies employed loperamide doses which are substantially higher, i.e., 8–12 mg/day, than the doses used in Japan (2 mg/day). Thus, we cannot antici- pate the use of loperamide as an effective antidiarrheic agent for postcolectomy diarrhea at such low standard doses.

Michelassi et al. [14] followed long-term functional re- sults after IPAA for UC and reported that the number of bowel movements per day did not decrease when monitored at 3-month intervals extending beyond the initial 3 months after the surgery. Their data appear to conflict with our re- sults in the control and CP groups, i.e., stool frequency at 1, 3, and 6 months after drug administration was less in com- parison to the values recorded in the premedicated samples. However, our data demonstrating that stool frequency in the control and CP groups did not differ between 3 and 6 months post-drug administration do not conflict with the r

than 6 months after the surgery.

The small number of patients in our study is a limitation. However, we believe that eight patients in each group are enough for analysis. Statistical differences were observed in the time-dependent decrease in stool frequency (Fig. 2) and the time-dependent increase in the score for nighttime soiling in the CP group (Fig. 4). In conclusion, our results

suggest that CP may diminish the frequency of nighttime soiling after IPAA for UC. CP does not appear to alter either stool frequency or consistency.

Acknowledgments This study was supported by Abbott Japan Co., Ltd., Tokyo. The study was presented at the Annual Meeting of the Society for Surgery of the Alimentary Tract, 2005, in Chicago, Illinois.