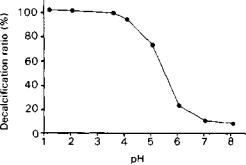 Fig. 1. Effect of pH on decalcification of calcium polycarbophil. Calcium concentration in the sample solution was measured by atomic absorption spectrochemical analysis. Each point represents the mean ± s.d. (n = 3). Standard deviations are smaller than the symbols.

juice was studied, decalcification was very fast and the decalcification ratio reached almost 100% after shaking for 2-5 min (data not shown). This implies that calcium polycarbophil would release calcium ions rapidly in the stomach to affbrd polycarbophil.

When polycarbophil gel was allowed to swell in 1-5% sodium bicarbonate solution, sodium ion concentration (349-5 ± 8-6 mM, mean ± s.d., n = 3) inside the hydrated gel was found to be twice that (166-8 ±0-6 mM) of the supernatant. Such a difference implies that the equilibrium swelling would be influenced by ionic osmolarity. The equilibrium swellings of polycarbophil in solutions of various ionic 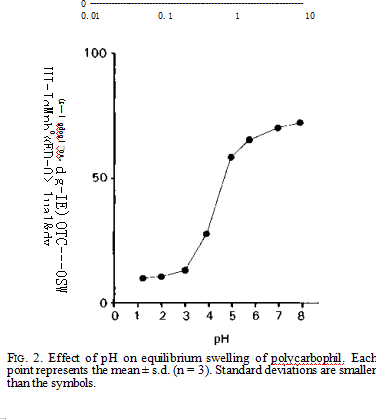 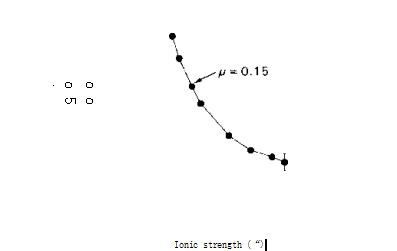 FIG. 3. Effect of ionic strength on equilibrium swelling of polycarbo- phil. Each point represents the mean 土 s.d. (n = 3). Standard deviations are smaller than the symbols, except in one case.

Table 2. Effects of various calcium salts on the equilibrium swelling

Each value represents the mean 土 s.d. (n = 3). The amount of calcium applied (20%) was the same fbr all sources of calcium and corresponds to the amount in calcium polycarbophil.

In the diarrhoeal state, the water transport rate in the gastrointestinal tract is so fast that water can not be adequately absorbed (Sadik 1989). We therefore examined the viscosity, 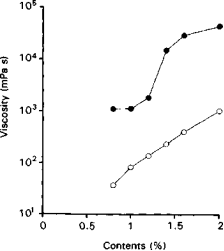 Fig. 4. Effect of polymer content on viscosity of polycarbophil (•) or CMC-Na (O). Viscosities were measured using a rotational viscometer at a shear rate of 10 s_\ Each point represents the mean 士 s.d. (n = 3). Standard deviations are smaller than the symbols.

as an indicator of fluidity, of polycarbophil in comparison with that of CMC-Na. The viscosity of polycarbophil increased with increasing concentration, and was larger than that of CMC-Na at all concentrations examined (Fig. 4). A similar tendency was observed at all rates of shear examined (data not shown). As polycarbophil forms a gel, this gel could reduce the fluidity of the gastrointestinal contents and improve the looseness of stools in diarrhoea. Additionally, the reduction of fluidity would reduce the transport velocity of intestinal fluid, and so water would be better absorbed. That is, the anti-diarrhoeal action of polycarbophil is due to the gel formation and the reduction of fluidity arising from the increase of viscosity.