HOME > News > Calcium Polycarbophil in the Management of Fecal Incontinence

Calcium Polycarbophil in the Management of Fecal Incontinence

We included 223 Japanese patients, of which 148 (66%) were female, during the study period. The patients’ characteristics are shown in Table 1. Table 2 shows the potential underlying causes for FI based on the questionnaires and the results of the ARM and EAUS. Of the 223 patients who were included, 28 did not return for a visit at our clinic after receiving the study drugs; thus, a total of 195 patients were available for the final analysis. Of these 195 patients, 106 patients (54%) received 1.5 g of CP, and 89 (46%) received 3.0 g of CP. 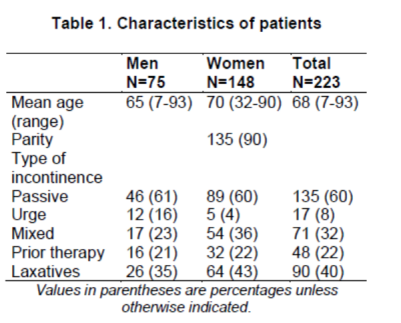 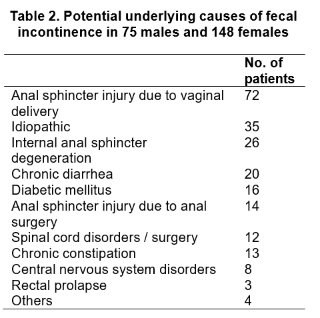 Among the 195 patients, 15 (7.7%) experienced side effects, which were not serious, and no patient deaths occurred during the study. All sideeffects are listed in Table 3. The frequency of side effects was higher in the 3.0 g group (11%) than that in the 1.5 g group (4.7%), but this difference did not reach statistical significance (P = 0.089). The most common side effects were constipation (2.1%) and hard stools (2.1%). Most patients were able to tolerate the side effects, buttwo patients (1.0%) discontinued the study because of drug-related nausea or bloating. Oneother patient was excluded from the study because the CCIS was not reported at the1-month visit. Accordingly, a total of 192 patients completed the study and were included in the efficacy analysis. 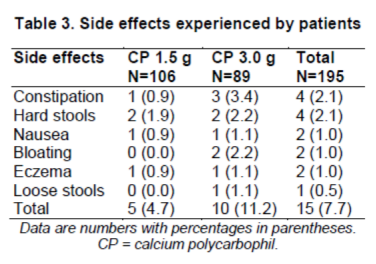 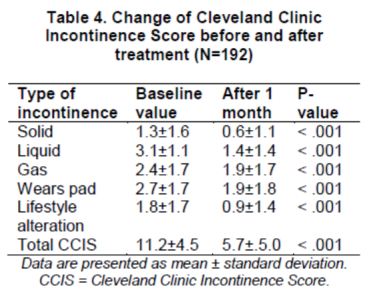 The ARM was assessed in 110 patients (57%) at1 month after the start of CP treatment: the results are summarized in Table 5. The patientsshowed significant improvements in the MSP after treatment, whereas there were no statisticalchanges in the MRP. 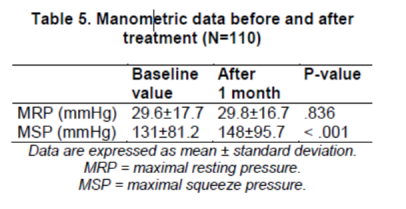 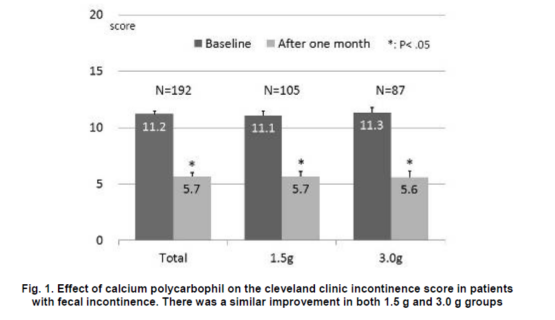 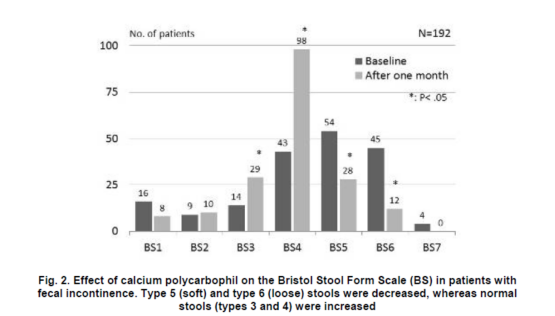 This is the first comprehensive clinical study onthe efficacy of CP in patients with FI that has been reported in an English journal. Thepresent study shows that CP alone can be an effective intervention for FI treatment. The resultswere objectively demonstrated not only by clinical scoring but also by stool consistencyusing established protocols.

CP is a synthetic, high molecular-weight polymerwith marked water retention and gel-forming capabilities. The former property reducesconstipation, whereas the latter ameliorates diarrhea. CP has been shown as aneffective therapeutic approach for the treatment of chronic constipation or irritable bowelsyndrome, whereas its effect as a single treatment option in FI has not been properlyinvestigated.

The CCIS is the most commonly used FI severityindex and includes a total of five items that are simple yet robust tools to assess FI. In thisstudy, patients with FI due to a variety of etiologies were administered CP, which resultedin significant improvements in all five CCIS items, including lifestyle alteration. Because more than 80% of the subjects showed an improvement ofsymptoms and complete continence was achieved in 14%, we believe that single therapywith CP was effective as a treatment of FI.

Our investigation of the safety of CP showed that none of the patients suffered serious adverse drug effects. The most common side effects associated with CP treatment were constipation and hard stools. Because these side effects were experienced by more patients receiving 3.0 g CP/day than those receiving 1.5 g CP/day, we believe that they were due to excessive pharmacological action. A main component of CP is synthetic resin, which is not absorbed by the digestive tract. Thus, adverse effects such as distention and discomfort that occur with the ingestion of psyllium, plantain, or similar fibers, were not experienced with CP, which is a major benefit of CP. While adverse drug effects were more frequently observed with 3.0 g CP/day, the improvements in the CCIS were similar in both 1.5 g and 3.0 g doses. Thus, we believe that a minimum dose of 1.5 g is sufficient for Japanese patients.

Our results show that one main reason for CP-mediated improvements in FI is the improved stool consistency as a result of decreases in the number of loose stools that can cause leakage with reciprocal increases in the number of normal stools. Antidiarrheal medications such as loperamide are used as a treatment for FI; however, in cases where the underlying cause is constipation, these medications worsen the constipation. Because CP has been shown to improve constipation, it can be administered to a wider patient population regardless of the type of bowel movement dysfunction.

Increasing dietary fiber can improve stool characteristics; however, it requires a high amount of intake, 25–30 g a day, a difficult task for continual ingestion. Because CP is available in either the tablet or granular form, it is easy to ingest. In addition, there are many generic CP preparations; thus, it does not place an undue economic burden on patients. In most countries, CP is available as an over-the-counter medication; thus, it is easily available even for patients with FI who may hesitate undergoing a medical examination because of embarrassment.

The limitations of this study include its open observational design with no control group, the short observation period, and the inclusion of only Japanese patients.

We found CP as a safe and useful agent in the management of FI. Further studies are required to determine effectiveness in the long term and investigate other treatment combinations.